I’m working on automating the deployment of our Forest Admin layout during our CD. I’m looking for a way to deployment the layout for an environment to another.

We have 4 environments (Development, Release, Staging and Production). When we are ready to create a new release, we want to deploy UI changes made on Development to Release. I would like to use environment:copy-layout but, if I well understood, it has been deprecated in favor of the push / deploy commands.

The documentation says we should use the command push but it does not explain how. 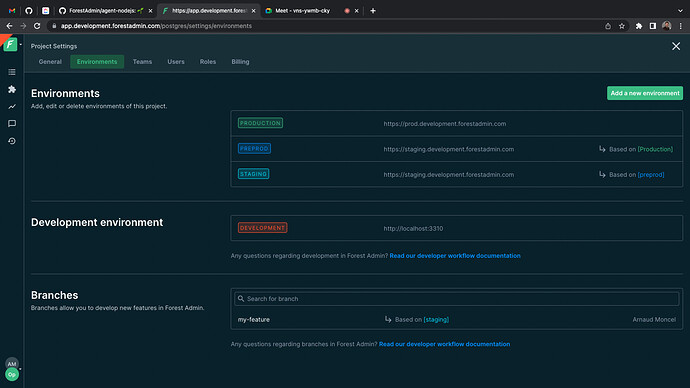 Here as you can see I have 4 environments.
Development > Staging > Preprod > Prod.

I can create branch only on my Development environment.

And after that, if I want to see the changes on Staging environment, I must use forest push.
The changes are now on Staging.

If you want to see the changes on Preprod you must use forest push with FOREST_ENV_SECRET of your Preprod environment.

Be careful the usage of deploy command can work to put changes from Preprod to Production.
You can read more here https://docs.forestadmin.com/documentation/reference-guide/how-it-works/developing-on-forest-admin/forest-cli-commands/deploy

Let me know if that help

Thank you for your answer.